How Much Is stETH Worth? 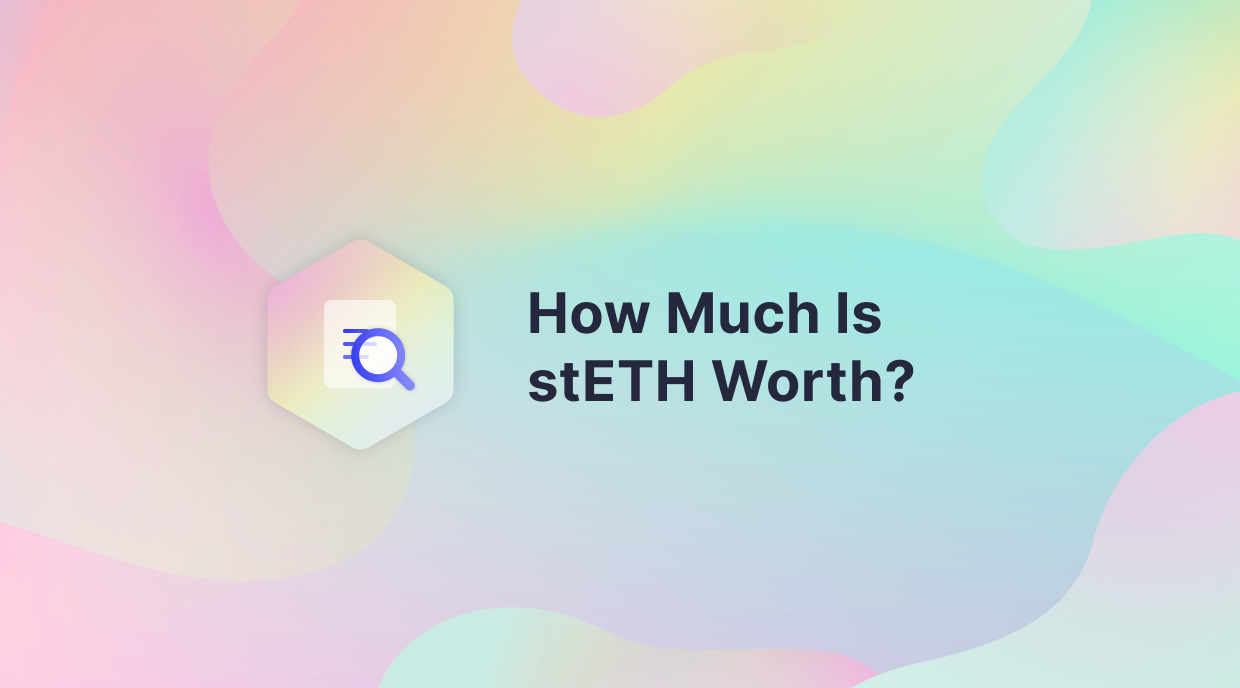 Lido is a staking solution for ETH 2.0 built to solve the limits of solo staking, as we mentioned in this post. It makes staked ETH liquid by providing a token that represents the staked amount and allows participation with any amount of ETH. Backed by several industry-leading staking providers and capturing a lot of attention in Defi, we need to understand one important question.

What is the true value of a token that represents staked ETH on the beacon chain?

This is relevant because lots of people have delegated their ETH to Lido in exchange for stETH. Since Lido offering has been relatively unmatched in the staked ETH market, some users may expect to be able to fully exit their stake before withdrawals are active one fork after the Merge. But, is this expectation well-founded? Should 1 stETH be always tradable for 1 ETH?

Let's dig deeper into the staked ETH derivatives market and see what we can learn.

As we learned before staking ETH in the beacon chain to validate Ethereum:

Lido with its staking pool has managed to take a leading role in the liquid staked ETH market. Users deposit ETH to Lido in exchange for the same amount of stETH. This stETH rebases daily to incorporate the profit and loss from the validators being run by validator node providers that work for Lido. Once withdrawals of ETH from the beacon chain are enabled, users will be able to burn stETH for the same amount of ETH.

This means that in principle each stETH should be worth exactly one ETH (since it's eventually, redeemable for the same amount of ETH). However, as users might have noticed, the market price of stETH is not precisely the same as ETH, they don't trade one to one. There are multiple reasons why this is the case.

The main reason why stETH doesn't trade at the same price as ETH is that withdrawals are not enabled in the beacon chain.

This means that if stETH is currently trading below 1 ETH there is no risk-free arbitrage, no one can buy one stETH and redeem today for 1 ETH.

Anyone who wants to bank such a profit needs to hold stETH for quite some time. This time can be estimated, but it's unknown, and users must bear risks. These could be Lido not doing their duties correctly or the Merge not succeeding and something wrong happening with Ethereum. Then, the price of stETH implies a certain risk premium.

This means, in simple terms, that as long as withdrawals are not enabled the price of stETH should incorporate some element of extra risk, being discounted to ETH in a proportional amount relative to the risk taken by those who hold stETH until withdrawals are enabled.

There is another factor to consider when looking at stETH valuation. There might be times when the demand to stake ETH increases over the stETH available in the market at the discount considered when taking into account risk until redemption.

In this case, the stETH price will trend to one ETH and stop there.

Why? In general, if Lido can accommodate any amount of ETH making as many validators as necessary, then anyone can always deposit one ETH and receive exactly one stETH. So any price deviations of market stETH above par will be quickly arbitraged away.  Although this simple assumption makes sense now, it's not guaranteed either as we will see further down.

Demand and offer point to a very important relation between ETH and stETH.

Someone might assume that this is a problem just for a while. Ethereum won't enable validators to withdraw their ETH for quite some time, and this whole issue will be more or less fixed in the future. Sadly, it's not that simple. Even in an ideal scenario, there will always be a slight discount or premium to ETH because depositing and withdrawing from the Ethereum beacon chain has a queue.

Staking and unstaking ETH from the beacon chain takes time. With the current network parameters, the maximum daily limit for new validators is 1125, after that they go into a queue where they get no rewards, and no yield. For withdrawals, the same thing happens. This means that, after all upgrades are done, if the beacon chain experiences a lot of withdrawals at the same time it will form a queue.

Assuming some conservative values, it’s expected that the validator's withdrawal queue will be at least 2 weeks long at the beginning. Such a long withdrawal time will impose at least a minimum discount in stETH in the ideal arbitrage scenario. Because of the time value of money the price of stETH in relation to ETH in the open market will be discounted in relation to the time it takes to unstake from Lido pool.

Premium of stETH over ETH could happen if the validator’s deposit queue grows very big and the returns of staking ETH are high. But this scenario is unlikely to happen. Users get stETH immediately after giving Lido their ETH, and they start collecting yield before the validator goes online. This means that yield lost to the queue is socialized to all stETH holders. This mechanism, where Lido socializes losses from the queue, puts a cap on the stETH premium.

As we have seen, there is no clear-cut answer to how much should a staked ETH derivative token be worth in relation to ETH. Multiple factors can influence the market pricing until the Merge happens successfully and the Shanghai fork, following the Merge, enables validators withdrawal.
If you have to take a general lesson: expect the price of stETH to be lower than ETH in general, but don't be surprised if it trades at a par or even a premium in case Lido design changes.